Humble beginning found Manny starting out by packing fruit at BC Frozen Foods, stocking the milk shelves of Walmart and getting the occasional gig doing mall security, Manny knew his passion lie in real estate. Once his education was complete, with his professional license in hand, Manny set out in to the real estate world determined to be successful. He now openly acknowledges that the early days were a struggle. 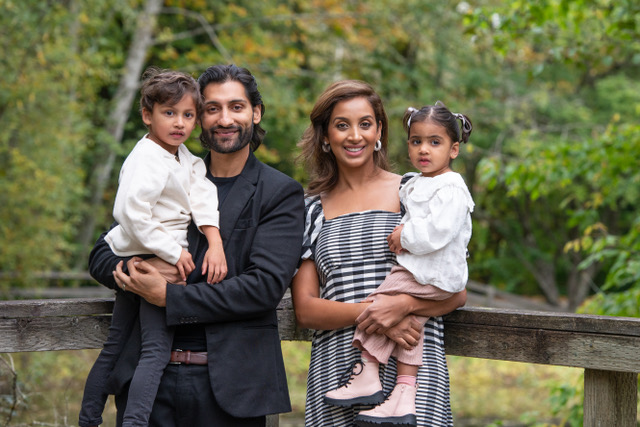 “I was a young punk with long hair,” he remembers with a mischievous smile. “I had to cut it off and smarten up if I was going to be taken seriously by anyone.”

What followed were long hours of hard work that didn’t guarantee instant success and Manny found it difficult to remain focused and optimistic. He concentrated much of his free time on prospecting, social relations and business building.

“My dad worked in the mill all his life, but had a fascination and a talent for construction. He would usually build one or two houses every year.”

Manny talks about his father’s accomplishments with admiration, putting much emphasis on the fact that these skills and knowledge gained, working with his father, has helped him become a better realtor.

“It wasn’t until late in my fathers career that he decided to go for his real estate license as well.”

The real break came when Manny and his father collaborated with the “Deol Group.” Promotional photos of father and son hit the community in various forms of advertisement, representing both sides of the generational gap, as well as providing a facade of mentorship. Regardless of the fact that both Realtors were novices in their field, these photos gave Manny instant credibility.

Years later now, Manny currently works at Royal le Page Wheeler Cheam, and his reputation often precedes him. Manny is not only a Medallion Club member, but a multi-award winning REALTOR, with over 10 years of experience buying, selling and building homes. His sales consistently rank in the top 5% of REALTORS in the Fraser Valley,

“Being a real estate agent you come to realize that everyone is on a different journey,” Manny confesses. “You tend to become part-time counsellor, part-time life coach, and part time mentor.”

Many real estate agents gain great satisfaction in knowing they helped people through major times in their lives and Manny offers an unmatched devotion to clients.

Community is important at all times, though especially during a global pandemic. Manny knows that being a part of a community can make us feel as though we are a part of something greater than ourselves. He often finds himself taking prospective clients on a scenic tour of our small town, showcasing the charming aspects of our community, his particular favourite being our very own breathtaking Fraser River Heritage Park.

Time and time again, Mission has shown itself to be welcoming and friendly. Working in real estate here can be very rewarding for people like Manny, who have an unparalleled passion for giving back. As 2018 and 2019’s Volunteer of the Year, he donates much of his time and resources to local small businesses, nonprofits and community events.

In addition to being an active and enthusiastic community member, he is a Director on the board of both Mission Community Futures and the Mission Downtown Business Association. He acts as Government liaison for both the Mission Chamber of Commerce and the Fraser Valley Real Estate Board, as well as being an active member of the Mission Sikh community.

“I like to keep busy. I thrive on multitasking.”

Manny lights up when he reminisces about the good old days in Mission or when he remarks how wonderful it is to raise his young family here. The community should be prepared to see many more great things in this realtor’s future.

It’s a Mission thing… and this is a great Mission guy.